When Spotify was launched in Sweden in 2008 and throughout large parts of the world in consecutive years, the service was an offer almost too good to be true. A decade later, people pay for streaming services they actually use.

Spotify insists on retaining the two-tire freemium/premium model, yet services such as Netflix, HBO and Amazon Prime for typical TV-content, and services such as Storytel for audiobooks are only available as subscription-based services. As audiences turn to streaming services also for other types of media content, they need to multiply their subscription fees for streaming media services a number of times depending on how many services they subscribe to. This raises the question of how many streaming services audiences are willing to pay for in the long term, and in turn customer-retention for streaming media services.

Media streaming services have become central for how audiences access media content, and particularly in Norway. The report “Medieåret 2016-2017” published by medienorge systematizes available statistics on media-use in Norway, including use of media streaming services. To summarize some key figures with regard to use of such services in Norway:

The report from medienorge does not include statistics on parallel subscriptions to streaming services. In the Stream-project we will conduct a survey this spring which will complement current statistics on use of streaming-services. In parallel we conduct research interviews with people about their use of streaming services. We’ve completed interviews with 12 users, aiming for a total of 20 participants during the spring.

The first 11 participants were strategically recruited in collaboration with Storytel to include users who also subscribe to streaming services for audiobooks. Whereas this implies that the study-participants diverge from the average streaming-user, this sampling procedure allows for an analysis of how audiences experience different types of media streaming services, as well as indications for how use of one type of service relates to other types of services.

Although our qualitative sample cannot be used for statistical purposes, it might be interesting to have a look at the number of media streaming services participants report to use. Services marked with * in the table refers to discontinued subscriptions or use. Participants are presented with pseudonyms and age. Audible is included although strictly not a streaming service. 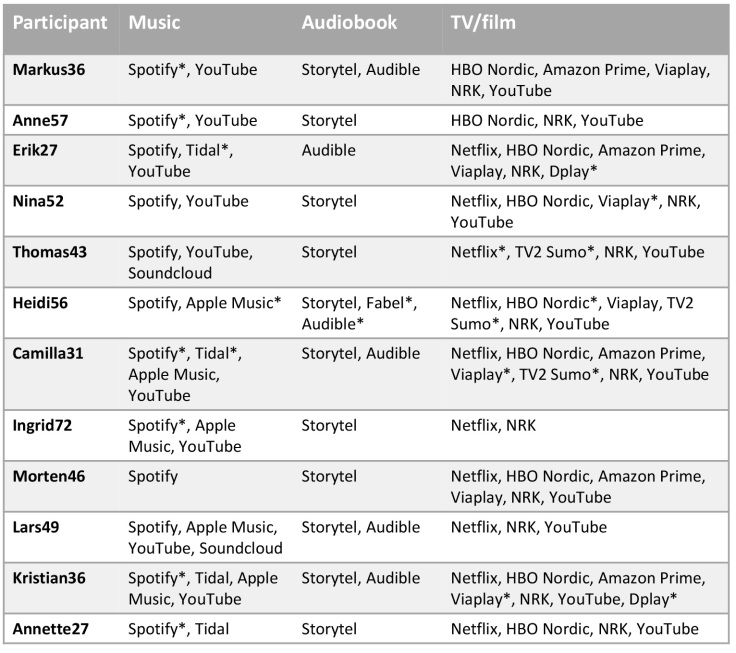 As a general tendency, study participants pay for access to music and audiobooks primarily through one streaming service, whereas they tend to have several parallel subscriptions to TV-content. Such patterns are unsurprising: the content-libraries of music-streaming services are vastly bigger than for TV/film-content, where the latter types of services are distinguished by marked differences in the types of content available for subscribers.

I will present the analysis of the findings at the Media Industries Conference 2018 in April. I situate this part of our study primarily in the context of marketing literature, a field of research that commonly investigate associations between customer satisfaction, loyalty and retention. Some tentative findings include:

Use and retention with regard to music and audiobook streaming link with affinity to music and books. To explain this very shortly with regard to music: those who have discontinued their use of music streaming services express that music is not that important to them; they are casual listeners. Participants with subscriptions to several music streaming services tell stories of how music has always been an important part in their lives.

Amount of use is important for the perceived monetary value. The sample of participants in our qualitative sample is heavily skewed towards users of Storytel. This is also reflected in the massive amount of time spent streaming audiobooks. In average participants stream audiobooks for 17 hours a week, compared to 6 hours for music and 6 hours of TV/film. Participants thus experience what we might term a significant bang for the buck ratio.

The convenience value (anything, anytime, from any platform) is of particular importance for music and audiobook streaming and enables a much more prevalent use of these services as secondary activities. Such patterns of listening to music is not fundamentally new with music-streaming. Yet for books the “killer app” is the combination of audiobooks (a format that of course precedes streaming) with the convenience value of streaming technology. Streaming audiobooks as a secondary activity explains how participants find the time for extensive listening:

Markus36: I listen to audiobook when I wake up, and then in the car, I listen to Storytel all the time, I drive about 60 to 120 km every day. Being stuck in traffic isn’t really that much of a dread anymore. So, it [audiobooks] make the days pass away much quicker. And I listen when I’m out walking.

Ingrid72: [I listen] when I paint or when I clean the house or cook. If I’m alone for a week. Or really everywhere, when I’m alone and do stuff, I listen to an audiobook.

Music and audiobook streaming to some extent compete for the same time-slots during the day. I’ve pointed to how affinity to music and books is important for understanding why the participants choose to continue or discontinue their subscriptions, and I’ve pointed to how both types of services enable secondary listening. Yet as secondary activities, music and book streaming compete for the same amount of time in the everyday lives of the participants, and for this particular sample, there are tendencies that streaming audiobooks takes up the time they would previously have spent streaming music.

Morten46: It’s a lot more fun to clean and tidy the house. Because I love to be able to just listen, and I can just put on a book. I probably use Storytel more that way now than music.

Heidi56: Storytel has kind of taken over for music. Like when I go to the gym, I use Storytel.

Such patterns also relate to participant experiencing it to require more work to curate their own music-library compared to filling up their streaming bookshelves with books.

Exclusive content to a large extent explains why participants start using and stay with TV/film streaming services. The marketing value of particular content can hardly be exaggerated when it comes to enticing participants to start subscribing to TV-streaming services. Moreover, as preferences for TV-content overlap across background variables such as age, gender and education, the same TV-series attract very different types of audiences. The continued release of new shows, in particular TV-series, is crucial for long-term retention. Some participants for example point to the experience of “having completed Netflix” which act as a trigger for them to reconsider their subscription, or at least, pausing their subscription.

So, how many media streaming services are participants willing to pay for in the long term? The novelty of media streaming services, particularly as represented by their convenience value, eventually wears off. As the service value reaches as state of normalization, long-term retention more than anything appears to depend on actual use. “Support-membership” is not a viable option.